Get it
Sponsored Links
Warning: Users can download the app from the links of Google Play and AppStore offered in the following articles.

This is a game aiming to give you the experience of extreme terror and smell of death, prepare and go ahead!

Freddy's namely "Freddy Fazbear's Pizza," is a pizza restaurant in the game where all the children and parents love to go for an enjoyable meal. The owner Freddy Fazbear along with his animatronic animal robots are running this restaurant, but the robots will turn wild and murder people.

Every player will start the game as night security watch to survive for five nights by using the security cameras and closing the office door. There's one thing you have to keep in mind that too much use of cameras and closing door will consume the limited energy you have. Once the electricity energy runs out, you may get eaten by those animal robots.

In the video game, each shift lasts from midnight to 6:00 a.m., a duration of about 8 minutes of real time. While in app version, it's about 4 minutes and a half. The player must be seated in the office and cannot move. With the roaming of the animals, dimmed lights, insufficient cameras and limited cameras, it's like a terror movie where you are the main character surrounded by horrors.

The five nights you have to survive stands for five different difficulty levels. The 6th level will only be unlocked after you succeed from the former five. After all the sixth levels, the "Custom Night" level will become available where you can adjust each character's difficulty degree.

Five Nights at Freddy's
jansjoyousjungle.com is not an official representative or the developer of this application. Copyrighted materials belong to their respective owners.
Warning: Users can download the app from the links following the Official Website and legal digital markets.
Get it
Average User Rating:
4.8
,
1630 votes 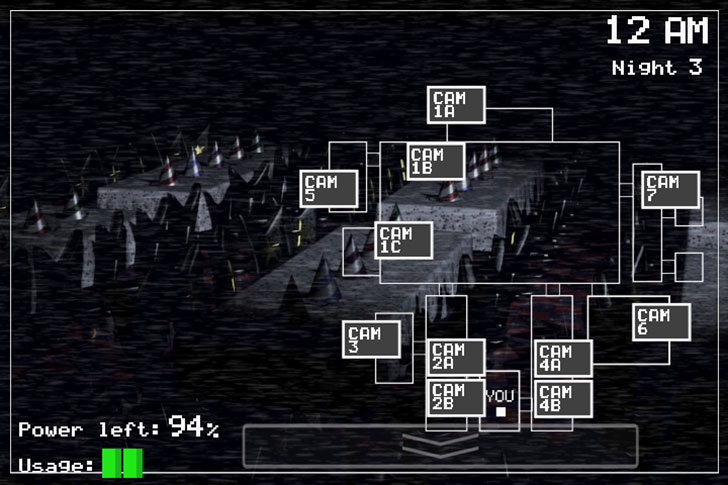